Who Knew about the Shrew?

Who Knew about the Shrew? 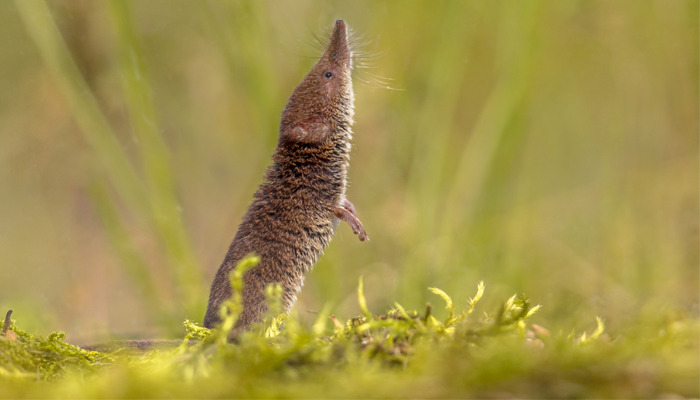 Although it resembles a long-nosed mouse, the shrew isn't a rodent, but rather a relative of the mole and hedgehog. There are 385 known species, making it the world's fourth most successful mammal family.

There are estimated to be around 100 billion shrews, that can be found all over the planet - only Australia, New Zealand and New Guinea have no native species. True shrews, as found in the UK, are from a different family than the West Indian, tree, otter and elephant shrews of other continents.

What shrews live in the UK?

With a distinctive pointed nose and small eyes that almost seem to disappear into its head; you can often spot the tiny common shrew in many a UK garden.  Also known as the Eurasian shrew, it is the most common species across Northern Europe.

What do shrews eat?

An insectivorous mammal, the shrew can often be found snuffling through the undergrowth, hunting for its prey - which includes spiders, earthworms, woodlice and insect pupae. It will also eat slugs and snails and can tackle earthworms up to 10cm long!

Requiring regular meals, they can eat every two to three hours, consuming up to 125% of their body weight daily. To maintain their body weight, they must intake a vast amount of sustenance, in comparison to their size. If the pygmy shrew doesn't eat for more than two hours, it's in danger of starving to death.

Where are you likely to spot shrews?

Common shrews are widespread, but they are not seen in the Scottish Isles, Channel Islands, the Isles of Scilly, Northern Ireland and the Isle of Man. Pygmy shrews are also found on the Isle of Man and the Outer Hebrides.

They can live pretty much anywhere, in habitats that include grassland, heathland, moorland, farmland, orchards, wetlands, woodland areas, towns and gardens. Living largely above ground, they tend to make their homes in surface tunnels in vegetation or they might use burrows dug by other animals.

Active during the day and night, they are quite territorial and aggressive, considering their size. In fact, their high-pitched screams can sometimes be heard as they fight over territories.

Do shrews live in groups?

During their relatively short life, shrews have three or four litters of around six young in each. However, a shrew can have up to ten litters in its life. As they are territorial, they drive off any rivals and come together only to mate.

The common shrew and pygmy shrew in the UK are not poisonous. However, their lesser-known relative, the water shrew, Britain's largest native shrew, has a poisonous bite that packs a punch. The venom is used to paralyse their prey, which consists of freshwater shrimps, caddis larvae and water slaters. Although their teeth can't penetrate a human's skin, their saliva can leave a rash.

What are the shrews' main predators?

In the UK, shrews have several predators. They often fall victim to barn owls and tawny owls. Foxes, weasels, stoats, cats and kestrels are also known to prey on shrews. However, the shrew is often abandoned by the predators, as glands on its skin produce a liquid that is believed to be foul-tasting. In particular, cats have been observed to drop shrews if they catch them, apparently due to the taste.

What survival skills to shrews have?

As well as producing a foul-tasting liquid, shrews have another amazing survival skill. In order to survive during the lean winter months, when food is scarce; they are able to shrink their skull, brain and organs to reduce their body weight.

It is called Dehnel’s Phenomenon after Polish zoologist August Dehnel, the scientist who first discovered the effect. Recent research by the Max Planck Institute for Ornithology revolved around studying the skulls of shrews at different times of the year.

Co-author Javier Lázaro said the phenomenon was a highly unusual way of preparing for the winter. Shrews don't hibernate and can't migrate, so because they must eat nearly continuously, they need a strategy to survive over the winter.

Lázaro and colleagues from the US and Germany wrote their findings in the journal, Current Biology, reporting how they captured common shrews over the space of one year. They put them under general anaesthetic, measured each animal's body mass and took X-rays of its head.

They microchipped each shrew and returned them to the wild in the same spot where they were caught. A total of 37 shrews were captured several times by the researchers, who explored the size of their skull as the seasons changed. There were some surprising results!

What were the scientists' findings?

In autumn, the shrews' body mass decreased by an average of 17.6% and then increased again in spring, just before the breeding season. The amazing thing was that the skull also changed in size, shrinking by an average of 15% in autumn and regrowing by 9.3% in spring.

Older shrews who lived for more than one year appeared to undergo a second shrinkage of their skull as they approached their second winter. Lázaro said this really suggested a correlation between the season and the shrinking of the shrew's skull, rather than it just being an effect of ageing.

However, the phenomenon is still veiled in mystery, as the adults' brain doesn't regrow completely in the spring, so they can have a smaller skull than the juveniles, but a greater body mass. Scientists can't really explain how the shrinkage occurs.

As the humble shrew proves, nature has some truly fascinating secrets.

While the Covid-19 lockdown continues, why not explore the great outdoors around you? Don't sit at home feeling trapped - wrap up well and enjoy the beauty of nature. Going for a walk costs nothing and can be inspiring and you never know what you might find!