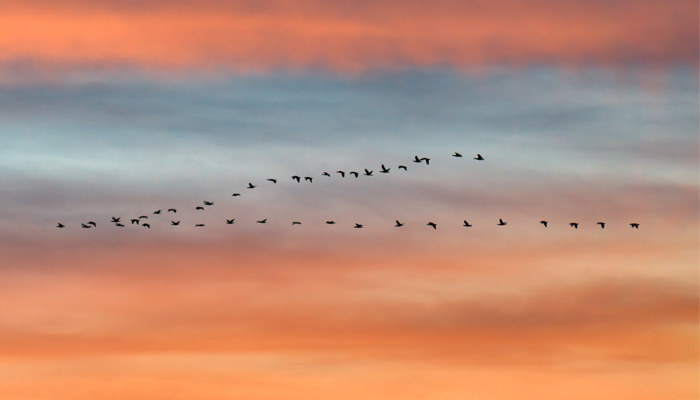 When you see birds migrating, have you ever wondered why they fly in a V-formation? Scientists have long debated the very same thing and now a new study has concluded it's to save energy during the flight.

For many birdwatchers in the UK, February and March are exciting months, as the spring migration period is the busiest time of the year. As winter visitors depart, and the summer migrants arrive, you'll see plenty of bird movement. The earliest arrivals are noted by an army of bird watchers, who log information every year for charities such as the RSPB.

Which birds are often seen in the UK?

According to the British Trust for Ornithology, the first spring arrivals in the UK are first logged by wardens at a Bird Observatory on the Calf of Man - an island off the coast of the Isle of Man. The wardens count every bird they see and keep a daily log to build up a complete picture of what species are migrating at any given time.

The first arrivals are usually the wheatear, chiffchaff and sand martin; with the swallow, willow warbler, blackcap and redstart flying in during March and early April. The house martin, common sandpiper, whitethroat, sedge warbler, whinchat and cuckoo arrive throughout April.

As we enter May, with the warmer weather approaching, the garden warbler, turtle dove, lesser whitethroat and swift will be seen in larger numbers on British shores.

Why do birds fly in a V-shape?

According to new research, the V-formation that most birds fly in is extremely important, especially for those flying long distance. A study published in Science Magazine online reported how scientists had used a microlight aircraft to track birds migrating from Austria to Italy. Juvenile birds carried data-loggers specially built in a laboratory, with GPS tracking their flight paths to within 30cm and accelerometers recording the timing of their wing flaps.

After assessing the data, the scientists concluded the birds synchronised their wings' flapping and carefully positioned their wingtips, apparently to catch the preceding bird's updraft, thus saving energy on the flight.

While it was previously believed the birds were simply following the leader to make flights easier, the study seems to point to a much more important reason for the V-shape. It echoes the formation of squadrons of planes, who save fuel by flying in a V-formation.

Scientists now believe migrating birds do the same, saving energy by capturing the draught from each other. Although the currents created by fixed-wing airplanes are more stable than the oscillating flight of a bird, the principle works the same.

James Usherwood, of the University of London's Royal Veterinary College, where the research was carried out, said a bird would alter the timing of its flapping to minimise the effects of the downdraft emitted from the other bird's body.

He admitted scientists "didn't think this was possible" because it was such an amazingly complex thing for the birds to do, but the research had proven otherwise. The feat requires an "incredible awareness" of the neighbouring birds and careful flight, he says.

The research was carried out on long-winged birds, as it was easier to track their wing movements and flight paths. It is estimated they can conserve between 20% and 30% more energy when flying in the V-formation. This is incredibly important when birds are migrating to warmer climates in spring and autumn each year, as some of them fly hundreds of miles and need to conserve as much energy as possible.

Birds must migrate to survive. They go to the best places for feeding and breeding at the relevant times of year, helping them to stay alive and have chicks.

The researchers suspect the same theory also applies to smaller birds when it comes to the V-shape, but it is too difficult to measure their physiological features, as it is an invasive process. The theory is described as a major breakthrough in the study of migrating birds.

Although they have be unable to find out how the birds find their aerodynamic "sweet spot" to create a perfect flight, scientists believe the birds might align themselves by either sensing the air current through their feathers or simply by sight. They might also move around and realign themselves mid-flight until they find the perfect position with the least air resistance.

Researchers are aiming to investigate further to work out how the birds decide who sets the pace and the route.

Do birds always travel at the same time?

According to the RSPB, birds know when it's time to migrate because of their internal "body clock". At the same time each year, hormonal chemicals are released into their system to tell them it's time to go. This is triggered by signs from nature - such as changing daylight hours, whether it's long days in early spring or shorter days at the end of summer.

How do birds survive a long journey?

Before migrating, the birds have a feeding frenzy, when they spend every waking minute eating as much food as possible to prepare for the long journey ahead. Their body will quickly turn the food into fat, forming a layer under the skin. This is converted into energy as the bird flies.

Smaller species of bird will gain around an extra 4% of their body weight before setting off. Some birds gain much more, such as the sedge warbler, which doubles its weight to 20g in three weeks. It has a particularly long journey, crossing the Sahara desert from its Asian and European breeding grounds to spend the winter months in Africa.

Once the birds are full of food, they are ready to go. Their departure depends largely on the weather, as they will wait for a spell of calm before setting off. In spring, some birds even pair up on the journey to the UK and will start looking for a place to nest as soon as they reach their destination.

Bird watching is a fascinating way of getting some fresh air and passing the time on a spring day, so put on your outdoor wear and wellies and enjoy the wonders of nature.