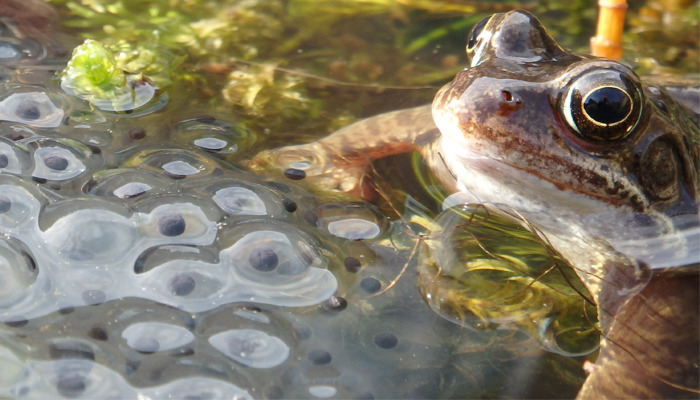 Did you know, garden ponds are increasingly important for the survival of the common frog due to a decline in its natural habitat? The number of natural ponds in the British countryside has decreased by one-third over the past century to under 500,000.

The number of frogs in Britain has been in decline since around 2014, according to the RSPB. Surveys by the wildlife charity have revealed only 39% of people see a frog at least once a month - a drop from 46% seven years ago.

The same goes for frogspawn: while many adults today recall seeing frogspawn and tadpoles in ponds as a child, the RSPB says this is becoming a rarer occurrence. A very useful visitor to your garden, the common frog can clear out nuisance slugs and snails – thus giving your plants a fighting chance!

How can you recognise a frog?

While frogs have been hibernating in the mud, or under log piles during the winter months, spring is the time of year when they start to get active again. Take care not to confuse the frog with our other spring garden visitor, the toad.

Frogs have distinctive features and colouring. With a darker stripe around their eyes and ears, their smooth skin can vary in colour from brown and olive green, to grey and yellow. Toads are distinctive because of their dry, bumpy skin.

The amazing thing about frogs is they can camouflage themselves to match their surroundings by lightening or darkening their skin tone. They grow to between 8cm and 13cm long and can weigh up to 22g. Frogs have a surprisingly long lifespan, considering their small stature, as they can live for up to 10 years.

A frog's life in springtime

Spring is a busy time for frogs, as it's breeding season. If you have a garden pond, you will probably find them in numbers around the freshwater, especially in warmer weather. While they tend to cluster around ponds during the breeding season, outside this period, they might wander hundreds of metres away from the nearest water.

Spawning takes place in early spring, normally in March, although due to global warming and climate change, frogspawn has been found as early as January in recent years in the south of England. It starts to grow into tadpoles and then frogs, but it's a relatively slow process.

Tadpoles take around 16 weeks to grow their long back legs, followed by their shorter front legs, eventually turning into tiny baby froglets. They are usually ready to leave the water and venture on to land by June, although it may be as late as September.

Scientists believe tadpoles can actually control their own rate of development, depending on their environment. Studies have found tadpoles living in a pond where there are predators tend to develop faster and leave the pond as soon as possible.

Sadly, around 90% of the frogspawn and tadpoles in a garden pond will be eaten by predators, such as birds, hedgehogs, dragonfly larvae, water boatmen and grass snakes. If the tadpoles live in a pond where there are few predators, they may stay there for up to a year.

Look for frogs when gardening

Most gardeners are happy to see frogs, as they will eat a variety of invertebrate prey - they are nature's natural pest control. If you spot a frog in your garden, but you don't have a pond, there's no need to worry. Adult frogs spend as much time out of water as they do in it, once the spring spawning is completed.

Take care to look out for frogs when doing your gardening, including mowing your lawn or turning the soil over, as they will often hide in long grass, or under the bushes.

If you're looking for frogs in the wild, they will usually be around a pond, in meadow areas, or in woodlands. They are most often seen between March and October.

The Natural England wildlife organisation is urging motorists to take extra care when driving over the next few weeks, as we're at the height of the annual frog, toad and newt migration. Amphibians will be on the move from winter hibernation areas to their breeding ponds and lakes.

When the weather is warm enough, there will be thousands of frogs and other amphibians making their way to their regular spawning places. They seem to have their own natural "sat nav", as they stick to the same routes they have used for generations.

Many risk their life by crossing a busy road because the urge to go to their spawning ground is so strong, so do take extra care when driving.

Can you make your garden frog-friendly?

If you want to attract frogs to your garden, you can do so in various ways, such as having the right plants and creating suitable places for resting.

Anyone can have a frog-friendly garden, according to the experts at Amphibian and Reptile Conservation. The organisation says our much-loved common frog will slowly start becoming less common if we don't conserve its habitat.

If you already have a garden pond, keep it amphibian-friendly by creating gently sloping sides so frogs can easily move between the land and water. Have a good mix of native British water-plants in the pond and also have a deeper area of at least 24 inches in the middle, where they can survive icy weather by staying on the bottom.

Even if you don’t have space for a pond, frogs will still use your garden to feed and rest. They will often hide away in log piles and compost heaps if you don't have a pond. If you want frogs to breed in your garden, however, you will need to build a small pond.

Dig a shallow hole just a few feet wide and add a pond liner. Fill it with water, making sure you dechlorinate the water with solution from a garden centre or aquarium. Add native pond plants and leave it alone to develop.

Amazingly, the frogs will find it unaided and will hopefully spawn there. If you find frogspawn in your pond, leave it alone, as ponds are full of microscopic organisms and algae for the tadpoles to feed on. Supplement their food with shop-bought tadpole food as they grow.

Before long, you should have your own thriving garden pond with its own ecosystem, providing a haven for frogs and other amphibians.