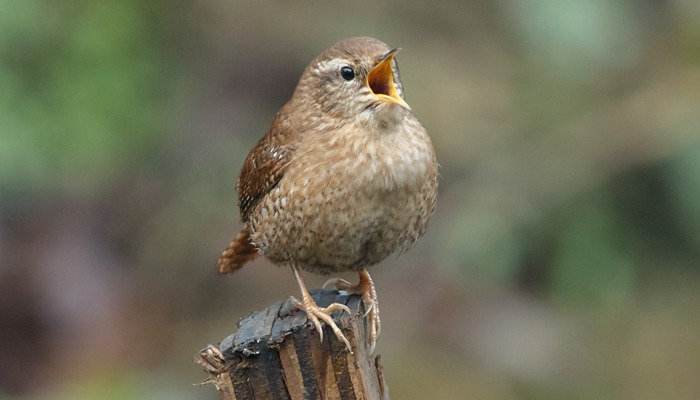 Birds are among the planet's most fascinating and tuneful creatures. While it might appear they are singing simply because they're happy, birds expend so much energy making themselves heard for far more practical reasons.

Birds have two main reasons to sing and they are both connected. Male birds sing to mark their territory, particularly in spring, when they are seeking a mate. When a male bird sings, he's telling rivals, "This spot is mine!"

He warns off counterparts, telling them he's willing to defend his territory. When he patrols his space and sings frequently, he's telling fellow male birds of his own species not to come near. A male bird will sing as he moves around the edges of the area he considers his turf.

The second reason birds sing is to attract a mate in the spring for nesting. Even male birds who have brightly coloured plumage may struggle to find a mate if their songs don't hit all the right notes, as female birds often choose their mate based on a combination of visual and vocal attractions.

Why do birds sing the dawn chorus?

The dawn chorus is part of the bigger picture of birds signing to defend their territory while mating and raising chicks. If you've ever listened to the dawn chorus, especially from outside, you will realise how amazing it sounds!

As the collective singing of many wild birds, who make an unmistakable sound by tweeting, chirping and twittering, seemingly in unison; the morning singing is typically carried out by male birds, with the best-fed, strongest males making the loudest noise, demonstrating to the female birds that they are fit and healthy. A particularly loud song at daybreak will also deter any rival males who may be trying to move in on the patch.

The dawn chorus is heard very early in the morning from March to July - peaking in May and June. If you want to catch the first few songs, you will need to be awake just before sunrise, although the songs will carry on well into the morning. However, it sounds best at first light, as there's less background noise in the still air. This means sounds travel around 20 times farther than later in the day, so you may be able to pick out the sounds of individual birds.

Does each species have its own unique song?

The amazing thing about birds is that each species has its own unique songs. An individual bird can hear a song carried on the breeze and can easily recognise whether the singer is one of its own kind.

During nesting season, the birds are all extremely vocal. As soon as the days start to get longer in spring, the singing becomes louder and more joyful. After the nesting season ends, the birds start singing less, as the territories will start to break down a little once the chicks have flown the nest.

Bird watchers can learn to recognise each different birdsong by listening to the patterns of the tweets and chirps and getting used to how they sound. For example, when a house sparrow sings, it produces the simplest birdsong. Little more than a series of chirps and tweets, one at a time, despite its lack of sophistication, it is a happy and enthusiastic sound.

The starling sings an unusual song, which is very long and contains plenty of beeps and clicks, combined with long whistles. It seems inventive and experimental, rather than producing tuneful melodies, but it’s still fascinating.

The first notes are higher-pitched than the closing notes, which are also longer. The blue tit produces rich and varied sounds, including short calls to stay in touch with other birds and tell them their location. It also has a call that sounds more aggressive (nicknamed a "scolding" call) that warns other blue tits of predators such as foxes and owls.

Perhaps one of the most famous of the dawn chorus, the distinctive sound of the blackbird is melodic and tuneful. When the sun has barely opened her eyes, the blackbird’s song can sound almost eerie, as it carries on the early morning breeze.

Using a rich, warm, baritone voice, with a relaxed pace; the amazing thing about blackbirds is that each verse of their song is different, often finishing with a short, squeaky series of notes.

What is the most common UK bird?

In the UK, you'll most likely hear the wren’s high-pitched chirping. Although one of our smaller wild birds at around 8cm long, it is one of the loudest! There are around 11 million breeding pairs in Britain, so the wren is more common than the house sparrow.

At the other end of the scale, the hawfinch is thought to be Britain's rarest bird. It lives in mature woodland. There are believed to be between 500 and 1,000 breeding pairs left, so if you see one in your garden, or on a woodland walk, you are very lucky indeed.

The hawfinch's high-pitched song is easily recognised, but not particularly melodic. Sadly, the species is on the red list and classed as endangered. It is protected by The Wildlife and Countryside Act 1981.

While British birdsong can seem loud, especially if you're listening to the full dawn chorus at sunrise, the world's loudest bird is the aptly named Screaming Piha - a native of the Amazonian rain forest. Although quite plain to look at, its birdsong is spectacular, reaching a volume of 116 decibels!

To put that into context, the sound of a rock band is around 120 dB and the noise level considered safe for the human ear is 85 dB, so the Screaming Piha sings so loudly that it could damage your hearing.

When you want to hear birdsong at its most beautiful, going outdoors on a spring morning to listen to the dawn chorus is a wonderful way to start the day - and it’s guaranteed to lift your spirits!