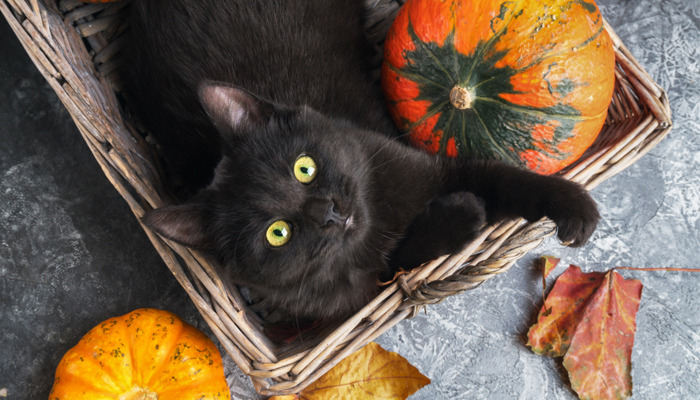 The link between black cats and Halloween goes back thousands of years to the times of the ancient Druids, although the reason they are considered bad luck is a bit of a mystery.

In reality, if you stroke a black cat, you'll have made a loyal friend for life. However, so many historical myths have built up around these beautiful and friendly felines that many people see them as something to be feared.

Black cats have endured a long stigma of cultural myths and superstitions to such a degree that they are always the most difficult to rehome.

Studies have shown that the biggest percentage (30%) of abandoned cats are jet black. Animal shelters in the UK and the United States say they are always the ones who spend the longest in the shelter. No one really knows why, although it's suggested negative associations from the movies and media may have a little to do with it. A more down-to-earth reason is that they don't photograph as well for websites and flyers publicising them for adoption, so people tend to go for their lighter-coloured counterparts.

In some UK folklore, black cats symbolise good luck, but sadly, the opposite view seems to be the most common one. In an attempt to redress the balance, animal lovers have launched Black Cat Appreciation Day on 17th August and Black Cat Day on 27th October!

The earliest records of black cats being associated with evil spirits date back 2,000 years in Druid circles, when the hapless black cats were sacrificed to the gods on 31st October on the celebration of the Lord of the Dead - the night of Halloween in modern times.

In the middle ages, people believed witches disguised themselves as black cats, so they became commonly associated with witchcraft. The unfortunate felines were often burned at the stake with their owner - the fate of most women suspected of being witches in those days.

Some historians believe the myth of black cats being evil began with the early settlers in the US, the Pilgrim Fathers, who were superstitious about anything they considered evil. They were said to think black cats were "demonic" and anyone who owned one was suspected of being a witch.

Some cultures believe black cats symbolise good luck. There is an old Scottish superstition that if a strange black cat arrives at your home, it brings prosperity with it. In some Irish and German folklore, it's considered lucky to see a black cat, especially if it crosses your path from left to right. If the cat walks towards you, it is believed to bring good fortune. However, if the cat walks away from you, it "takes the luck with it", so is considered unlucky in these circumstances.

There was a popular legend that the 17th-century English king, Charles I, thought his black cat was a source of good luck. After his cat passed away, King Charles was arrested and charged with high treason, so maybe be was right!

What are some of the Halloween superstitions?

Many ancient superstitions relating to black cats are resurrected on the spookiest night of the year, Halloween. Be wary if you're out on Halloween and a black feline crosses your path after dark, as this is particularly unlucky.

If you turn your back on it, you risk being cursed! This is because black cats are said to be witches in disguise, who have come out on Halloween because they will blend in better. Similarly, if a black cat turns its back on you, your luck is about to run out.

There seems to be no logical reason for black cats to have this amount of misery and lament poured on them, as they are no different from any other cat and simply want a comfy bed to curl up on and a nice bowl of food.

Should you keep your cat indoors on Halloween?

Animal rescues say they often have an influx of people adopting black cats and kittens in the run-up to Halloween. However, some shelters refuse to adopt them out at this time of year - pointing out they are not a festive accessory and they should be loved as a pet for life.

Some animal charities suggest keeping your cats safe indoors on Halloween. While there are no statistics to show that animal cruelty is any more serious on this night than at any other time of year, there's a practical reason for this advice.

The streets and roads are traditionally busier on Halloween, as families and children are out trick or treating, so there's a greater risk your black cat may be knocked down, or run off scared as a result.

Halloween can be a scary holiday for pets and it's safer to keep your cats indoors - although it may be quieter than usual this year, as a result of the new Covid-19 lockdown measures in the UK, announced on 12th October.

The RSPCA says next time you're considering adding a feline family member to your home, ignore the myths because a loving black cat might be a simply purrfect companion.