I am a Mole and I Live in a Hole

I am a Mole and I Live in a Hole 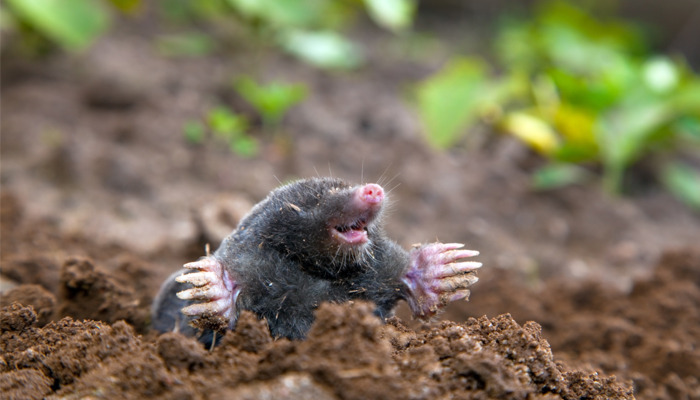 Did you know, there are an estimated 35-40 million moles alive and well in the UK? Yet you will seldom see this tiny creature, as they're the only animal that lives solely underground!

The life of a mole is a fascinating one. The species found in Britain is the European or common mole, which has the Latin name, Talpa Europaea. It's able to live underground for 100% of its life because it has a larger number of red blood cells compared to any other mammal.

A mole can live in an environment where there are low oxygen levels of just 7%, compared with the 21% oxygen levels that human beings require to live above ground. Most of us may never see a mole during our entire life, especially if we're city dwellers living in an apartment, or in a house without a garden.

This is a great shame, considering their fascinating underground network, as we're missing out on one of Mother Nature's great wonders!

What is the moles' habitat?

Moles are very adaptable and can live in a diversity of landscapes, including urban and rural areas, gardens, moorland and upland regions, grassland, in woods and on arable land. Although infrequently seen, their presence can be detected by the molehills they leave on the surface.

They dig out a system of underground tunnels and chambers and throw the excavated soil above ground to get rid of it. Their activity is greatest in late winter through to early spring. Prolific diggers and territorial, if you see multiple molehills, they can be the activity of just one mole.

How much do they dig each day?

Moles are incredible when it comes to digging! They can shift around 540 times their own bodyweight, tunnelling up to 200m every day. Considering a mole is only around 150mm long, with a bodyweight of 110g to 120g, this is an amazing achievement.

As an industrious, hard-working little species, they spend four hours at a time digging continually, followed by four hours' sleep, before digging for another four-hour shift. This means, within every 24 hours, they dig for three shifts of four hours each.

Imagine how industrious humans would be if we could dig at that rate - the garden would be done in no time!

Moles can see, but they are light sensitive as a result of spending their life underground in the dark. They depend more on their hearing and sense of smell than their sight.

Their internal ears are positioned behind the shoulders, so their snout acts as a kind of "sound tube" to amplify noises towards their ears. Sensory hairs at various points help them navigate around their dark tunnels.

What is their diet?

Moles eat grubs, worms and larvae, hence they are classified in taxonomy as belonging to the Eulipotyphla order, formerly known as Insectivora.

Each mole must eat approximately 20 worms a day (half their own body weight) to survive. If their current tunnels run out of worms, they will just keep on digging until they find more.

Are moles a protected species?

Moles have basic protection from cruelty under the Wild Mammals Protection Act 1996, but they are not specifically a protected species. If they are trapped and caught, they are protected by the Animal Welfare Act 2006.

Sadly, moles have been persecuted and killed in large numbers by humans for many years. At the beginning of the 20th century, they were killed for their fur to make coats. Nowadays, they are often killed as "pests", despite the fact they eat insects potentially damaging to agriculture - they can contribute to pesticide-free farming.

Are there different species of moles?

There are many different species of moles across the world, although in the UK, there is only the native common or European mole.

One of the most prevalent species in the world is the marsupial mole strain in Australia. Scientists argue they are more closely related to kangaroos and koalas than to our European moles.

How many babies does the average mother have?

Male moles are known as "boars" and females are called "sows", as with the pig family. The breeding season lasts from February to June, at which time a female will normally have three to four young in their underground nest.

Many young moles are mistaken for orphans when they begin leaving the nest between June and August. People who've found moles while out walking have taken them to wildlife centres, fearing they are sick, but if the mole has fur and open eyes and appears uninjured, it's best to leave it alone.

The only time you should rescue a mole and see if it needs veterinary treatment is when it appears to have been dug out of its underground home by a dog. Wear gloves before you handle it and check for injuries. Take it to a vet if it appears injured.

Never release a mole you have found in another place, as this can have serious and possibly fatal consequences due to moles being territorial. They come together only for the breeding season, and outside this period, they tend to lead solitary lives.

The average lifespan of a mole in the wild is short - only around one year. They can live up to three years. The oldest mole recorded reached six years old in captivity.

Do moles feature in folklore?

The mole is first mentioned in literature in the period of Middle England, roughly dating from 1150 to 1500. Its name originated from the Middle English word "moldwarp", meaning earth-thrower.

People used to believe that if they picked up molehills on 31st December (St Sylvester’s Day), the moles wouldn't throw any earth up again. There was also a belief that frost would vanish in two days if a molehill appeared.

Although there was nothing to suggest moving molehills on New Year's eve stopped the moles from creating more, the theory about frost may have a grain of truth, as the moles' digging through the frozen earth would loosen it, making it easier for the sun to permeate the solid ground.

Where did the metaphor "a mountain out of a molehill" come from?

The oft-used phrase apparently first appeared in William Roper’s 1557 biography, The Life of Sir Thomas More. It detailed how the much-publicised corruption charge against the Lord High Chancellor of England had been overturned, concluding, "Thus was the great mountain turned scant into a little molehill."

Do moles feature in pop culture?

The popular song, I Am a Mole and I Live in a Hole, became the best-known hit of the Jamaican-British vocal group, the Southlanders, in the 1950s. The famous title line from the song was spoken by Harry Wilmot (father of comedian Gary Wilmot) in his deep bass voice.

Ironically, the song didn't even chart when it was released for fun in 1958, but it became the most popular song of the band's live set. Even when they were sick of playing it and tried to remove it from their repertoire, fans at gigs would shout for it, and they had to play it countless times.

The group's founder, Vernon Nesbeth, said they even learned to sing it in Japanese to satisfy fans overseas! Although the band had many chart hits in the '50s until they split up in 1961, the "Mole Song", as it was known, remained their most famous number.

If ever you see a mole in your garden, please don't think of it as a pest! Remember these little creatures are adept at clearing your soil of the many bugs that might attack your plants, so you're lucky to have them in your corner.