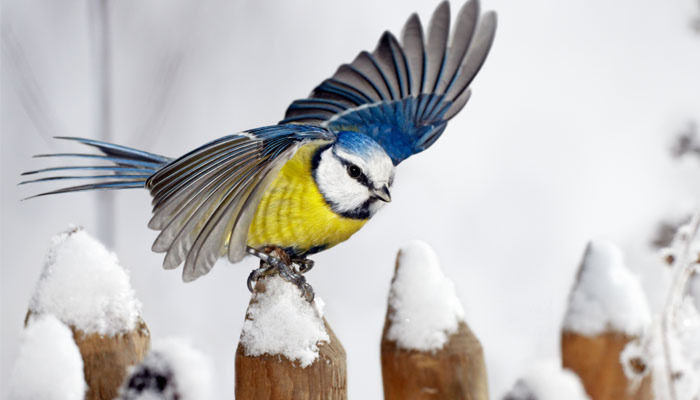 Winter seems to arrive out of nowhere, with the weather changing almost overnight from late autumnal sunshine to crisp, cold mornings and freezing nights. Birds can face a fight to survive during the British winter, when there are fewer daylight hours to forage for food and snow and ice can cover feeding areas.

With the temperatures dropping, we need to do anything we can to boost the wild birds' chances of survival. As the natural food supply dries up, help our feathered friends by leaving them a supply of fresh water (always checking that it hasn't frozen over), plenty of food (especially fatty foods like fat balls) and shelter in the shape of hedges, evergreen bushes or ivy.

The beauty of winter is that some beautiful bird species will appear in your garden if you leave food out for them. Our resident British birds will be joined by others that have migrated from continental Europe, Russia and Scandinavia. These foreign visitors will normally set off on their journey in October, crossing the North Sea to arrive on the eastern coast of the UK. They then spread out all over the country in flocks.

Read on to find out which species of wild bird you're likely to see in your garden this winter...

“The North wind doth blow and we shall have snow. And what will poor robin do then, poor thing?"

As a symbol of Christmas and Britain’s National Bird, the red-breasted robin is a UK native breeding bird. During the winter, more robins fly in from Europe to boost their numbers. Favourite foods include berries, many kinds of fruit, and seeds growing on trees, shrubs and vines.

With its pinkish-red breast and black cap, the male bullfinch is one of Britain's most colourful birds. The female is black, blue and brown with a cream chest. These birds live on the edge of woodland, but in winter they will arrive in gardens in small groups, where they enjoy a diet of seeds. They also feast on the buds of fruiting trees and can eat as many as 30 buds per minute. Young birds will eat insects. Although bullfinches can be seen all year round, they will venture into our gardens more in winter, searching for food.

A native British bird, the blue tit has colourful plumage of blue, green, white and yellow feathers. It is around throughout the year but may be more prevalent in our gardens in winter. It enjoys eating seeds and will also eat suet pellets, suet balls and peanuts in hanging feeders. Blue tits are particularly intelligent birds. In the days when many householders had milk in glass bottles delivered to their doorstep, blue tits were notorious for pecking through the foil top to steal the creamy bit at the top!

The brambling is distinctive, thanks to its resplendent orange and black colouring, which shines out among the starlings at the bird table. Closely related to the chaffinch, in winter it may form flocks that are thousands-strong. With his orange breast, the male has brighter colouring than the female, although both have white rumps. They enjoy a diet of seeds and insects. Bramblings breed mainly in Russia and Scandinavia, although they have sometimes been known to breed in Scotland.

Migrating from Scandinavia to spend winter in Britain, the waxwing is a rather plump bird with a distinctive crest. With reddish-brown feathers, a black mask, yellow and white wings and a yellow-tipped tail, these beautiful birds enjoy berries, especially rowan and hawthorn berries, although they will also eat flowers, buds and insects. In particularly bad weather, or when the berry season has been poor, waxwings will migrate in huge numbers, sometimes in flocks that are thousands-strong.

When the temperatures drop, welcome the winter birds to your garden by providing plenty of food, water and shelter and you won't be disappointed. You can attract an amazing variety of species from all over Europe.

In the cold winter months, birds need extra energy to keep warm. They also need to lay down fat reserves to help them through the long winter nights. We can all help by ensuring they have plenty of food to see them through the coldest months of the year.