What the Jackdaw Saw!

What the Jackdaw Saw! 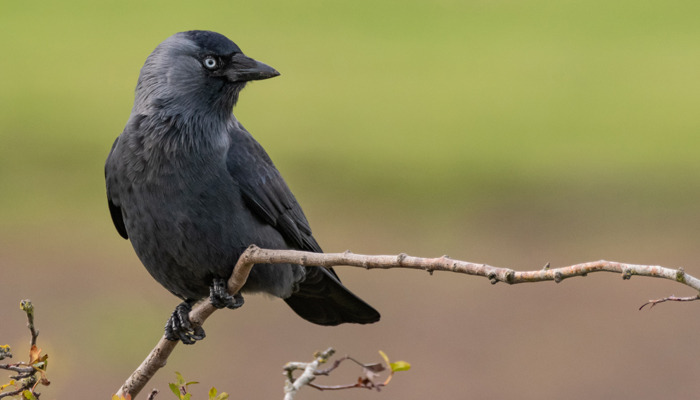 The jackdaw is one of nature's most intelligent birds, as well as being an incredibly sociable creature. This lively little bird can recognise individual humans - a rare skill in the animal kingdom, attributed only to magpies, pigeons and chimpanzees.

Jackdaws being studied in the wild easily learn new skills and tricks, and they are easy to train in captivity. Incredibly clever when it comes to gaining access to bird feeders, in bygone times, when more people had glass bottles of milk delivered to their doorstep, jackdaws were adept at pecking the silver foil lid off to drink the milk!

The jackdaw is the second-smallest member of the crow family, of the genus Corvus, measuring 13 to 15 inches long and weighing around 8.5 ounces. Its plumage is mainly glossy black, with some subspecies having a purple tinge to their feathers, or a greenish-blue sheen on their throat.

With black legs and a short, stout, black beak, both the male and female look alike, although the head and neck feathers fade more with age on the male birds. Juvenile jackdaws have duller plumage. They have a squeaky greeting call and a different feeding call when the adult birds are summoning their young.

They are sometimes mistaken for crows; but the crow is generally bigger, with a total length of 17.5 to 18.5 inches and a weight of up to 22 ounces. The carrion crow is all black, without the purple and greenish-blue tinges of the jackdaw, while the hooded crow is black, brown and grey.

What are jackdaws' origins?

Swedish zoologist and botanist Carl Linnaeus was the first person to write about the jackdaw, in his famous book, Systema Naturae, in 1735. Noting the species' fondness of picking up shiny coins, he called it Corvus Monedula - a name derived from the Latin word for money, "moneta".

Prior to this, in 16th century England, King Henry VIII introduced the Vermin Act of 1532, when rooks, crows and "daws" were said to have eaten the grain. This was the colloquial name for jackdaws before they were officially classified by Linnaeus. The common name "jackdaw" derived from adding the prefix, "jack", which traditionally meant a small form - a term that originated in the 16th century.

The jackdaw's conservation status is "least concern", meaning its numbers are plentiful and growing, with about 1.4 million breeding pairs in Britain and a further 30 million pairs across Europe. The species is prevalent from Scandinavia to North Africa, spreading as far as central Asia.

How clever are jackdaws?

No-one knows how jackdaws can recognise individual people, but research has shown they possess this incredible skill. Jackdaws love people and the empathy between them has been proven on many documented occasions, particularly when someone has rescued an abandoned fledgling and saved its life.

Close relationships between humans and jackdaws have enabled much research. Studies by Cambridge zoologist Auguste von Bayern reveal jackdaws recognise human faces and respond to our expressions. Just as human eye contact plays a key role in social interactions, jackdaws communicate via the eyes. Once a jackdaw knows a person, it can "read" their eye movements and can even follow the person's line of vision to unearth hidden food.

One famous partnership in 1933 involved golfer Mr AW Aitken, of Ventnor, on the Isle of Wight, who was accompanied to tournaments by his pet jackdaw, Jack, who was 16 months old. Their photo was published in the worldwide press, with Jack sitting on Mr Aitken's shoulder as he played.

Are jackdaws useful birds to have around?

The jackdaw is useful when it comes to pest control, as its diet in the wild includes slugs, mice, earthworms, woodlice, spiders, snails and frogs. It also enjoys berries, cherries and walnuts.

However, some farmers see the species as a nuisance, as it also eats crops such as cereals and potatoes. It is often blamed for eating poultry feed, game feed, eggs and young birds. However, scientists say jackdaws are rarely the culprit and blame grey squirrels, magpies, foxes and cats for the loss of eggs and young chickens.

Jackdaws are found in farmland, woodland and in urban areas, thanks to their adaptability. You would be likely to spot jackdaws on woodland walks, especially from early spring onwards.

They tend to nest in cavities, using anything from a chimney to a hole in a tree, constructing their nests from sticks for the outer section, lined with soft materials, such as wool. If you want jackdaws to nest in your garden, encourage them by putting up tawny owl nesting boxes. Their eggs are pale blue with dark speckles. A jackdaw usually has four or five eggs.

A familiar garden visitor from early spring, numbers peak in June, as they are looking for food for their young at this time. The species' social behaviour is endearing, as they mate for life, with the young birds pairing during their first autumn. They don't breed until they are more than one year old.

Commonly seen in flocks, flying high in the skies in spring and summer, the established pairs tend to fly close to each other, even when in a large flock.

The jackdaw featured in the famous poem, The Jackdaw of Rheims, written by the English cleric and poet Richard Barham for his compilation of humorous verse, The Ingoldsby Legends, in 1840. He wrote under the pen-name Thomas Ingoldsby.

The poem tells the story of a jackdaw who steals a cardinal's ring at an important gathering of monks, friars, knights and squires. The jackdaw hops off with the turquoise ring when the cardinal leaves it at the side of his plate.

Thinking it has been stolen, the cardinal checks all the monks' pockets and has everyone searching the room. Not finding his ring, he curses the person who stole it, but is shocked when the humble jackdaw comes limping into the room, with one "crumpled claw" and barely able to stand.

They realise the jackdaw has fallen victim to the cardinal's curse after stealing the ring. The bird invites those present to follow him. He leads them to his nest at the back of the belfry door. "The first thing they saw, amidst the sticks and the straw, was the ring, in the nest of that little jackdaw," writes Barham.

The cardinal immediately removed the curse and the bird returned to full health within seconds. He became so attached to the cardinal that if any monks swore, or fell asleep during prayers, he would give a loud "caw!" to tell them off. When the loyal jackdaw eventually died, he was made a saint.

Barham intended his verse to produce laughter, rather than be taken seriously. He was said to have written it to ridicule the strict "church dignity" of the era. He was well-placed to comment, being a cleric himself!

The jackdaw is a fascinating little bird and if you're lucky enough to entice them into your garden this spring, you will have hours of fun watching their antics!