We are still despatching on a next day delivery service, however, delivery delays are likely to occur. 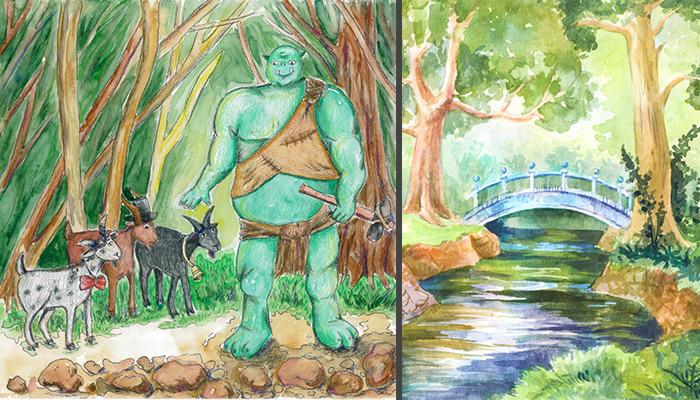 First published in Norske Folkeeventyr (Norwegian Folk Tales), the tale of The Three Billy Goats Gruff is a 19th-century fairy story compiled by writers Jørgen Moe and Peter Christen Asbjørnsen in 1841.
The first English language version of the story was translated and published by British translator George Webbe Dasent in his 1859 compilation, Popular Tales from the Norse.

The rather gruesome story revolves around three male goats trying to outsmart a hungry troll - who tries to eat them as they cross a bridge to find food.

The exact origins of the fairytale are unknown, as it has been around in Norwegian folklore for many years. Moe and Asbjørnsen were fans and collectors of folklore in their native land.

Moe was a poet and author, who hailed from the municipality of Hole, in the Ringerike district. He later became Bishop of Kristiansand in the Church of Norway. Asbjørnsen was a writer and scholar from Christiania (now known as Oslo), the capital of Norway.

In 1832, at the age of 20, Asbjørnsen began collecting and writing down fairytales and folklore. In 1834, while studying at the University of Oslo, he learned Moe had begun searching for relics relating to national folklore. The lifelong friends decided to compare their results and collaborate on future projects.

Asbjørnsen became a professional zoologist, while Moe Graduated from Oslo University in 1839, after studying theology, initially making a living as a tutor. Their compilations of fairytales and folklore was a side-line to their regular professions, although their popular books made them a good living.

The Three Billy Goats Gruff is one of the most popular Norwegian legends. The central characters are three goats of different sizes: usually identified as three brothers, although other versions say they are grandfather, father and son, or mama, papa and baby goats.

Although their name was "Bruse" in the original Norwegian version of the story, the family name "Gruff" was used in the earliest English translation.

The tale begins with the goats feeling hungry, as there's hardly any grass left near their home. They decide they must cross the river to reach a lush meadow beyond. However, a terrifying troll lives beneath the bridge. Legend has it he will devour anyone who attempts to cross the bridge, but the goats decide to chance it anyway, or they will starve.

The smallest billy goat tries to sneak across the bridge first, but the troll spots him right away, warning, "I'm coming to eat you up!"

The clever little goat tells the troll he's so small that he isn't worth eating. "I have a brother who's a great deal bigger than I am!" says the little goat. The greedy troll considers this for a moment and then agrees to let the small goat cross, thinking his older brother will have more meat on him.

Somewhat cautiously, the medium-sized goat then tries to cross the bridge, but the troll stops him immediately and issues the same threat. However, this goat is also more intelligent than the troll, telling him the same tale his younger brother. He convinces the troll that the biggest goat, who will be along soon, will be a far better meal for him. Again, the troll considers this and decides to let the medium billy goat cross.

Eventually, the third and largest billy goat thunders up to the bridge and starts crossing. He was said to be so big that the thundering of his hooves could be heard from a mile away as he approached. The troll is ready for him and this time is intent on eating him. The largest goat isn't at all scared and challenges the troll - who, in a rage, runs at the goat. Rather scathingly, the mighty goat sneers, "You're going to eat me up? We'll see about that!"

As the troll attacks, in the centre of the bridge, the goat knocks him off with his horns. The troll plummets into the water below, where he sinks and is never seen again. The biggest billy goat joins his two brothers in the new meadow and from then on, the bridge is safe.

The goats are able to go to the rich meadows whenever they wish and in true fairytale tradition, they all live happily ever after!

Moral of the tale

The fairytale has remained as popular today as when it was first published in the 18th century because it carries a timeless message. According to some scholars, the moral of the tale is that we shouldn’t be greedy. Had the troll decided to eat the smaller goats, he wouldn't have been killed by their big brother.

However, other analysts say it has a deeper meaning, relating to making changes in our life. The troll represents how our own fear of change stops us from doing the things we want to try. It isn't going to step aside to let us sample the lush paddock on the other side of the bridge. Making small changes, represented by sending the two smaller goats across first, also won't work. Many people remain in their comfort zone and may not have the courage to take the plunge and take a different path.

The big goat thundering along the bridge and butting the troll over the edge represents the theory that making extreme changes requires extreme actions! We must take big and bold steps to build momentum and become an unstoppable force to change our life.

These messages both translate to modern-day life, although ironically, they have completely opposite meanings! We can choose not to be greedy, choosing a safe approach in order to gain rewards in a timely manner; or we can decide to throw caution to the wind and make major changes in our life, without letting the possible consequences hold us back.