The Eager Beaver: Our Climate Saviour

The Eager Beaver: Our Climate Saviour 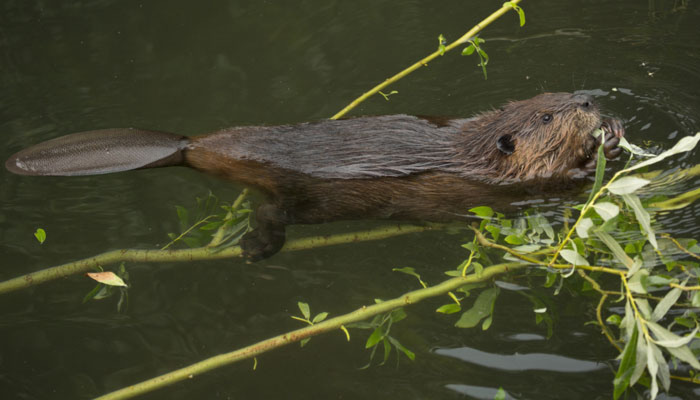 The beaver is a large semi-aquatic rodent that has been reintroduced to the wild in Britain after being almost wiped out due to over-hunting. This fascinating creature is gradually reappearing on waterways in England, Scotland and Wales, following conservation work spearheaded by the RSPB and other wildlife organisations.

One of the most amazing facts about this industrious mammal is its ability to build dams that can reduce flood risks in the surrounding area. At a time when climate change is increasing the risk of floods, causing widespread damage across the UK, anything to mitigate the problem must be welcomed.

This little creature is so hard-working that its name has become synonymous with the phrase "eager beaver", meaning to tackle every task with enthusiasm and vigour. Today, the beaver has gone from being officially extinct in the wild in the UK to having a 400-strong population.

Britain's resident species is the Eurasian beaver, whose scientific name is "Castor fiber". Its thick fur ranges from a rich deep brown colour to dark beige. It can weigh up to 30kg and measures around a metre or more from the head to the tip of the tail.

Webbed feet enable the beaver to swim, while their powerful jaw and strong teeth mean they can chew and fell trees to build their homes and dams on the water. Their most striking feature is a large, flat, broad tail - the focal point of their body.

A common misconception is that beavers eat fish, but they are herbivores who eat aquatic plants and grasses, leaves, tree bark and twigs.

The North American beaver, which is slightly smaller than its European relative, weighs in at an average of 20kg.

Why does the beaver build dams?

Beavers build dams on rivers and streams to restrict the water flow, creating a pond of deep, still water in which to construct their homes, known as lodges, which are made of a mixture of branches, twigs and sticks, bound together with thick mud - which provides insulation against the cold and damp. Building on the water keeps them safe from predators, such as red foxes and lynx. Although they have no major threats in the wild in Britain, they are vulnerable to being disturbed by people and dogs.

Using their massive teeth to gnaw trees, before eventually felling them, they then carry on chewing them to divide them up into smaller branches; dragging them into place on the water to construct the dams. They can hold their breath for up to 15 minutes, which comes in handy when they are building underwater. An almost leathery tail helps to balance them as they saw down the trees.

Their tails ward off predators and store fat - a particularly useful function in cold weather. Although their tails don't require maintenance, beavers groom themselves to keep their fur clean.

Do beavers live in communities?

With a lifespan of between seven to eight years; beavers are believed to mate for life, living in small family groups, typically comprising the two adults and several young, known as kits - they have between two and four kits every year.

The youngsters stay with their parents for about two years, until they eventually leave to find their own territory and a mate.

How do beavers help the environment?

The beaver helps to support the ecosystem where it lives. When a beaver builds dams, this reduces the flood potential by around 60%. Their dams and lodges create wetlands, which provide habitat for other wildlife such as ducks, insects, turtles and frogs.

The way beavers chew trees and shrubs at the waterside mimics a traditional method of woodland management known as coppicing. This boosts the capacity of many species of tree to grow new shoots from their roots or stump. A coppiced wood is one where the young tree stems are continually cut down almost to ground level. This encourages them to grow back as dense shrubs to provide shelter for birds and other animals.

Dams also trap sediment, improving the water quality. They increase the cover and give fish species, such as salmon and trout, greater opportunities to forage.

In areas where beavers live, there will tend to be more bats in the forest, as the beavers create gaps in the tree cover, making it easier for bats to navigate in the dark.

Why were beavers extinct in the wild?

Britain's native beaver was wiped out in the wild in the 16th century. The last mention of beavers in England dates back as long ago as 1526. Sadly, they were hunted for their fur, for meat and for a secretion known as castoreum, used in medicine and perfume.

A population of Eurasian beavers is gradually being re-established in the wild, across their former range, through a well-planned and licensed release programme. The RSPB says the beaver is known as a "keystone species" because it has a significant positive influence on the surrounding environment.

A population of beavers has lived on the River Otter, in Devon, since 2008. Their origins are unknown, although another pair was released there in 2016 to increase genetic diversity.

In 2011, a pair of beavers were introduced in southern Devon, near Dartmoor, as part of a scientific study. They built dams on local waterways that created 13 ponds. Scientists found they reduced flooding by releasing precipitation over a matter of weeks or days, rather than hours.

A beaver population of unknown origins also lives around the River Tay in Scotland, while another population in Knapdale Forest was released by the Royal Zoological Society of Scotland and the Scottish Wildlife Trust.

In 2019, beavers were reintroduced into a four-hectare area on a farm in North Essex as part of a flood risk reduction project. The landowner is monitoring the impact on flooding and wildlife.

Are beavers a protected species?

The RSPB welcomed the announcement, amid fears the beaver population in England could again decline if landowners decided to legally cull them. In Scotland, the Eurasian beaver was added to the Habitats Regulations in May 2019 as a European Protected Species. There is now a management framework and beaver mitigation scheme in place there. Furthermore, legislation allowed the beavers in Scotland to expand their range naturally, instead of relying on reintroduction programmes.

What are the RSPB's plans are for the future?

The RSPB is supporting the River Otter Beaver Trial - England's only licenced population of free-living beavers, led by the Devon Wildlife Trust, in liaison with Exeter University. The RSPB is also a member of the Beaver Advisory Committee for England, working in liaison with other organisations co-ordinated by the Beaver Trust.

The ROBT has involved studying the beavers since 2015 and reporting how successful the project is. It is the first formal mammal reintroduction in the UK's history. The results of the project are being presented to the Department for Environment, Food and Rural Affairs as the basis for an action plan for the future of beavers in England.

What should you do if you spot a beaver?

Beavers have been hailed a "climate saviour" by scientists, thanks to their dams minimising the risk of flooding and their ability to create new wetlands and restore native woodland. Watching beavers in their natural habitat has become an increasingly popular pastime for wildlife lovers.

The Wildlife Trust encourages people to watch beavers, as they are fascinating creatures, although you mustn't approach or otherwise disturb them.

During the current lockdown, taking exercise is permitted, so if you're lucky enough to live in a rural area where there are resident beavers nearby, exploring outdoors around their location is a wonderful way of getting some fresh air and exercise, while experiencing the wonders of nature first-hand.

The young kits in particular, emerging from the lodge as they start to mature, can often be seen out and about, searching for food with their parents, in autumn and winter. You can also expect to see plenty of other wildlife around in the habitat the beavers have created.