And the First Tree in the Greenwood

And the First Tree in the Greenwood 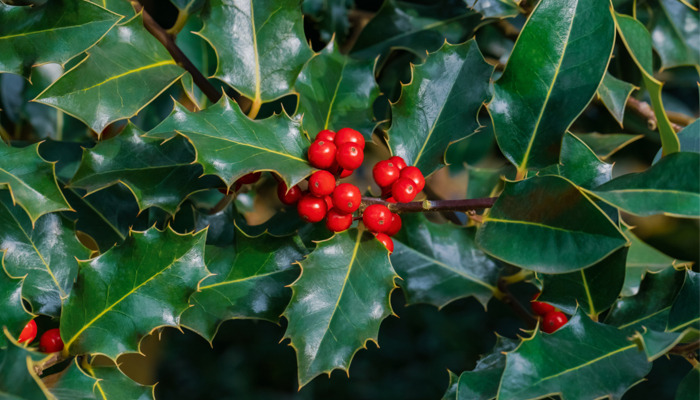 Holly is a beautiful, vivid, native evergreen that has flourished in the UK's woodlands for centuries. An important winter food for wildlife, it is often found in historic gardens, native woodland and ancient deer parks.

As one of Britain's favourite Christmas plants, its symbolic associations originate in Pagan culture and Christianity. Highly prized by the Victorians, holly continues to be a signature plant in formal gardens. It is a hardy plant, valued for its tolerance to the cold winter climate.

With more than 200 cultivated varieties growing all over the UK, it is an extremely versatile evergreen. Its Latin name, "ilex aquifolium", translates to "with pointed leaves", but surprisingly, not all types of holly are prickly. As well as our native varieties, intrepid 19th-century explorers travelled around the globe looking for new plants to enrich English gardens and returned with exotic species of holly from Japan and China.

Today, Christmas wouldn’t be complete without those beautiful wreaths and garlands of holly.

What are the origins of holly?

Before holly accompanied the Christmas tree as part of our decorations, it was considered by the Druids to be a sacred plant because most plants withered in winter, but holly remained green all year round, with its brilliant red berries standing out against the snow, even in freezing conditions.

Druids were a society in ancient Celtic culture, dating back to around 400 BC. They believed holly represented eternal life and fertility. Cutting down a holly tree brought bad luck, as it was believed to have magical powers, but hanging a few sprigs in homes would protect the occupants.

In ancient Rome, people associated holly with the god of agriculture and harvest, Saturn, so they decked their public halls and homes with holly boughs during the festival of Saturnalia - an annual celebration held every December. It began as a one-day festival, but by 133 BC, it had expanded to a week-long event, beginning on 17th December.

Early Christian calendars marked Christmas Eve as "templa exornatur", which translated to "churches are decked" - meaning with boughs of holly.

Legend has it that holly berries used to be white but were stained red forever after Christ was crucified for the sins of humankind. Throughout the ages, holly has gone on to symbolise Christmas and Christianity.

Holly features in some of our most famous Christmas carols, most notably in The Holly and the Ivy, which describes the beauty and splendour of the holly growing in the English countryside.

No-one knows for sure who wrote the lyrics to this jolly carol, although historians say they were first published on a broadside in 1710. They may have originated in the Cotswolds. The lyrics were published again on various broadsides in the early 19th century.

English writer William Hone mentioned The Holly and the Ivy in his 1823 book, Ancient Mysteries Described, where he listed Christmas carols. However, there was no clue to the music at that time.

In 1849, a book review by an unknown critic suggested the lyrics combined poetry and religious ballads. This seems to ring true.

The first verse is the most famous, as the narrator enthuses, "The holly and the ivy, when they are both full grown, of all the trees that are in the wood, the holly bears the crown. The rising of the sun and the running of the deer, the playing of the merry organ, sweet singing in the choir."

Then, as the song progresses, it describes the religious symbolism of holly: "The holly bears a berry as red as any blood, and Mary bore sweet Jesus Christ for to do us sinners good."

Published in folk music collector Cecil Sharp's sheet music collection, English Folk Carols, who first heard the carol sung by his friend, Mrs Mary Clayton, who lived in Chipping Campden, in the Cotswolds, today's definitive melody for The Holly and the Ivy first appeared in 1911.

Mary remembered the carol from her childhood when the melody was exactly as we know it today. Her cousin, Canon Kennaway, was the vicar of Chipping Campden for 40 years, until 1872. She was a frequent visitor to the vicarage, heard the melody there and remembered it well enough to sing it to Sharp some 50 years later.

Another charming Christmas song about holly is the Sans Day Carol - a Cornish carol written in the 19th century. Also known as the St Day Carol, it contains the famous line, "And the first tree that's in the greenwood, it was the holly!"

The lyrics and melody were transcribed from the singing of Thomas Beard, a resident of St Day village, in the parish of Gwennap, near Redruth.

Its lyrics have a similar theme to the holly and the ivy, especially when it talks about the symbolism of the red berries: "Now the holly bears a berry, as blood is it red, then trust we our saviour, who rose from the dead."

Listed in The Oxford Book of Carols, the Sans Day Carol uses the holly as a symbol of Christ and celebrates his birth. A Cornish version of the carol, Ma Gron War'n Gelinen, has also been published. It had an extra fourth verse, which was later translated and added to the English version.

How important is holly for birds and animals?

As well as symbolising Christmas, holly provides shelter and food for many bird species in the colder months. When a lot of edible plants are bare and other food sources have disappeared until spring, blackbirds, redwings, fieldfares and thrushes feast on holly berries.

Plenty of different species of bird nest in holly, as its spiky leaves provide protection against predators. In addition, holly leaves that have fallen off the tree are slow to break down. The deep leaf litter that builds up on the ground gives hedgehogs and other small mammals, such as the dormouse, a cosy place to hibernate over winter. Creatures such as toads and slow worms also spend winter in the holly leaf litter.

If you go out on a countryside walk this winter, you'll likely see holly growing naturally around woods, rural paths, parks and gardens, although there doesn’t seem to be many berries left this year! If we listen to the old wives’ tale, the plentiful supply of berries means a harsh winter in Britain, although an abundance of berries is indicative of a mild and wet autumn.

If you’re out and about looking for holly to make your wreaths and other decorations, be sure to wrap up warm! Hanging a holly wreath on your door at Christmas symbolises eternal life and invites the spirit of Christ into your home.