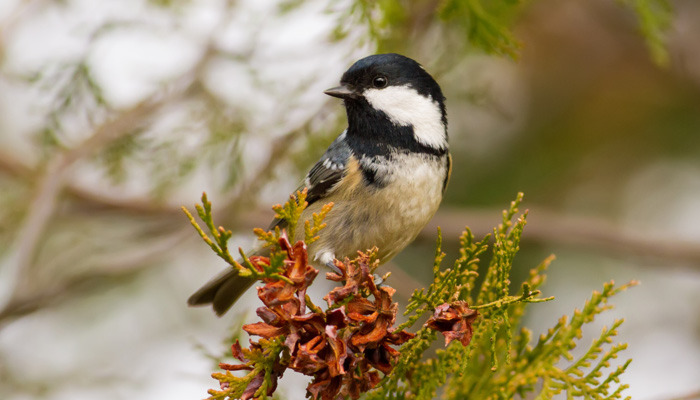 The coal tit is a frequent visitor to gardens across the UK and can often be spotted feasting at bird-feeders, not only in winter, but all year round. In conservation terms, the species is classified as being of "least concern", as there are an estimated 760,000 coal tits across Britain.

First noted by Swedish botanist and zoologist Carl Linnaeus in his 1758 book, Systema Naturae, initially, he called the coal tit the "parus capite nigro" bird, which translated to "black-headed tit". It was first spotted in Sweden, but Linnaeus later discovered how widespread it was across Europe.

As its original Latin name implies, the coal tit has a distinctive black cap on its head. Predominantly grey, it has white cheeks, a white patch at the back of its neck and a buff-coloured chest. One of the smallest members of the tit family, it measures around 12cm long and weighs around 9g, making it slightly smaller than the blue tit. It has a slim beak, which means it's well-suited to feeding in conifer trees.

Where do coal tits live?

Coal tits prefer to live in woodland areas in conifer trees, although they can also be found in parks and gardens where trees are prevalent. They live in tree hollows, making their nest in a cup shape from moss, spiders' webs and wool. They will also use artificial nesting boxes facing away from direct sunlight. Unless food is scarce in winter, they aren't particularly territorial.

What do they eat?

In the wild, they eat mostly spiders and insects, which they actively hunt, although they also eat nuts and seeds. When they come into our garden and eat from bird-feeders, they prefer a wild bird seed mix including peanuts, seeds and dried mealworms. They will often take food from the garden table and fly away to store it in their nesting area, to eat later on.

Are coal tits a protected species?

Like all birds, coal tits in the UK are protected by The Wildlife and Countryside Act 1981, which protects all wild birds, their eggs and nests. It is illegal to intentionally kill or injure a bird, or to damage the nest while it's being built, or is in use.

Although the public can go bird-watching and enjoy seeing the wild birds in their natural habitat, if you touch and damage the nest or eggs, you will be breaking the law. There are stiff penalties if you're convicted - the maximum fine for stealing wild birds' eggs is £5,000 per egg and a six-month prison term.

Are there any similar species?

The coal tit is in the same family as the great tit, willow tit and marsh tit. The great tit is the largest of the four species, measuring 14cm long, with a wingspan of 24cm. It has distinctive green and yellow feathers, including a bright yellow breast. It is not an endangered species and has two million breeding pairs in the UK.

Sadly, an endangered species, the willow tit is classified as red in conservation terms. There are only 3,400 breeding pairs in the UK. They have a black cap and bib, with a mid-brown back and pale grey chest. They are 11.5cm long with a wingspan of 17cm-19cm and can weigh up to 14g.

Spotting a coal tit in your garden

Beginning in April, the breeding season sees the coal tit have up to 12 eggs per brood. The female incubates the eggs for between 14 and 16 days and then the chicks are fed by both parents for up to 19 days, until the young fly the nest. You might see more coal tits in your garden at this time of year as a result.

Their lifespan is about two years and they live in flocks as adult birds. They usually stay around the area where they were born, so if you're lucky, you'll have these bright little birds in your garden continually, as they will probably carry on breeding in the local area.

If you're on a woodland walk, look out for coal tits, with their distinctive large head and black cap. They are fascinating, busy little birds and a great wildlife favourite.